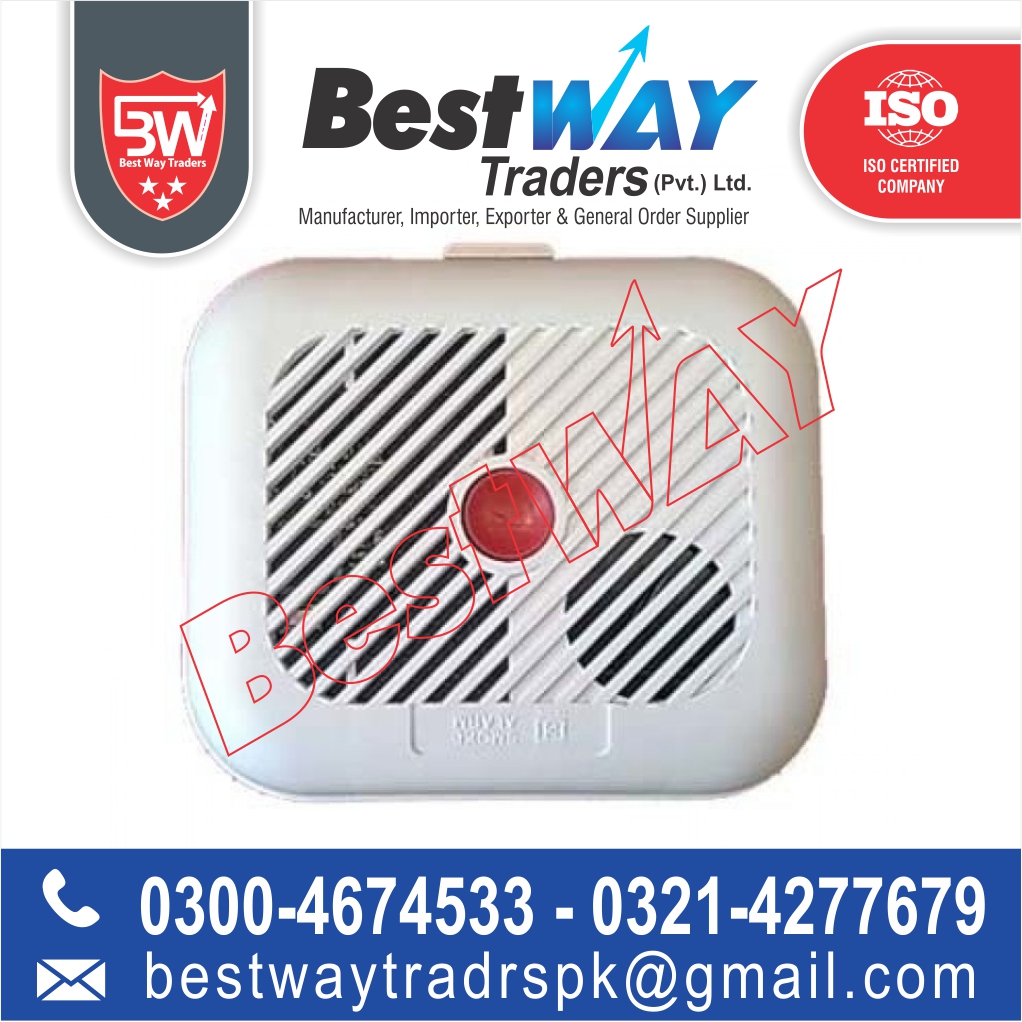 A smoke detector is an electronic fire-protection device that automatically senses the presence of smoke, as a key indication of fire, and sounds a warning to building occupants.
Commercial and industrial smoke detectors issue a signal to a fire alarm control panel as part of a building’s central fire alarm system. By law all workplaces must have a smoke detection system.
Household smoke detectors, or smoke alarms, issue an audible and/or visual alarm locally from the detector itself. They can be battery-powered single units or several interlinked hardwired (mains-powered) devices backed up by batteries. The latter must be installed in all new buildings and after major refurbishments.
Smoke detector types
There are two basic types of passive smoke detectors: photoelectric (optical) and ionisation (physical process). A combination of the two types of alarm (dual sensor smoke alarm) is recommended for maximum protection from both fast flaming and slow smouldering fires.
Combined optical smoke and heat alarms and combined smoke and carbon monoxide alarms are also available.
A photoelectric detector senses sudden scattering of light when smoke enters the detector chamber, triggering the alarm.
Photoelectric smoke detectors respond an average of 15 to 50 minutes faster to fire in its early, smouldering stage, before it breaks into flame, than ionisation alarms. They can be installed near kitchens. Some dual optical models are available.
Ionisation smoke alarms are highly sensitive to small smoke particles and typically respond about 30 to 90 seconds faster to fast flaming fires than photoelectric smoke alarms, but not to smouldering fires. They may be too easily set off if they are installed too close to kitchens, or garages.
Ionisation alarms carry a small amount of radioactive material between two electrically charged plates, which ionises the air and causes current to flow between the plates. When smoke enters the chamber, it disrupts the flow of ions, thus reducing the flow of current and activating the alarm.
The appropriate type of smoke detector must be installed to avoid them being disabled because dust or condensation sets them off falsely. A more appropriate detector, such as UV or infrared system which is not triggered by particles, should be installed if that is the case.
Aspirating smoke detectors

There is also an increasing number of aspirating smoke detectors (ASD) on the market – more advanced, highly-sensitive, technologies that provide earlier warning detection and are used as part of active fire protection.
ASD systems work by drawing in air from each room through small, flexible tubing. The air is then analysed to identify the presence of minute smoke particles in a continuous process. They are not reliant on room air flow, so can detect smoke before it is even visible.
Aspiration systems are widely used and preferred in challenging situations such as areas of high airflow, where condensation is present, or where very early detection is required in locations such as communications and computer rooms.
systems, a brand name of Honeywell, are laser-based advanced ASDs that give a pre-fire warning. They are beneficial in areas where high smoke sensitivity and easy access is required, such as computer rooms, cold rooms and high-ceilinged buildings like warehouses and churches, because the detectors can be located at accessible levels for maintenance purposes.
Auto-aligning optical beam smoke detectors
The latest type of intelligent smoke detector is a laser-assisted infrared optical beam smoke detector that self-aligns in less than a minute. They are used to protect large commercial and public spaces such as theatres, shopping malls and sports centres with large skylights, lofty ceilings or condensation issues.
Some models can be installed with up to four detector heads per system.
Incidentally, some smoke detectors are not smoke detectors at all, but security devices incorporating hidden cameras.
Heat alarms
Heat alarms detect an increase in temperature caused by a fire, although they are insensitive t
Human impact of fire investigated in new study
The Centre for Economics and Business Research, Aico, and the Housing Safety and Wellbeing Taskforce, is conducting research into the human impact of fire.
Nittan launches Visual Alarm Base for its Photoelectric smoke detector
Manufacturer of fire detection products, Nittan Europe,
Exploring the intersection of physical and cyber security
Jane Waterfall explains how systems from video surveillance to smoke alarms can connect to analyse data and improve effectiveness of service.
Council takes legal action against tenants who refuse to have fire smoke detectors repaired
Four people in Kirklees, best way traders, received warrants to enforce access to their homes in order to carry out fire safety work.
GFE fire detection equipment used to protect Europe’s largest mixed-use shopping mall
Fire detection solutions from Global Fire Equipment (GFE) have been installed Fact
Hunter Seymour highlights what fire professionals may need to be taking into consideration.
FIREX Tech Talks: Apollo Fire Detectors – Soteria Dimension
Apollo Fire Detectors provides an exclusive overview of its Soteria Dimension optical fire detectors, which can be flush mounted.